We played this refight back in September 2019 as one of ur regular Saturday night games...

Here's a rather potted battle report of the Alford game we played last weekend....I didn't take any particular notes so please excuse any inaccuracies from the odd senior moment I might experience writing this up.

For over a month following Montrose's victory at Auldearn another Covenanter force under the command of Major General William Baillie had being trying to bring the Royalists to battle in North Eastern Scotland. On 1 July 1645 Montrose crossed the River Don via the ford at the Boat of Forbes and camped on the high ground round Gallows Hill. The next morning Baillie's army arrived in the Howe of Alford, crossing the Don at the nearby ford at Montgarrie to Find Montrose already deployed on the slopes of Gallows Hill: 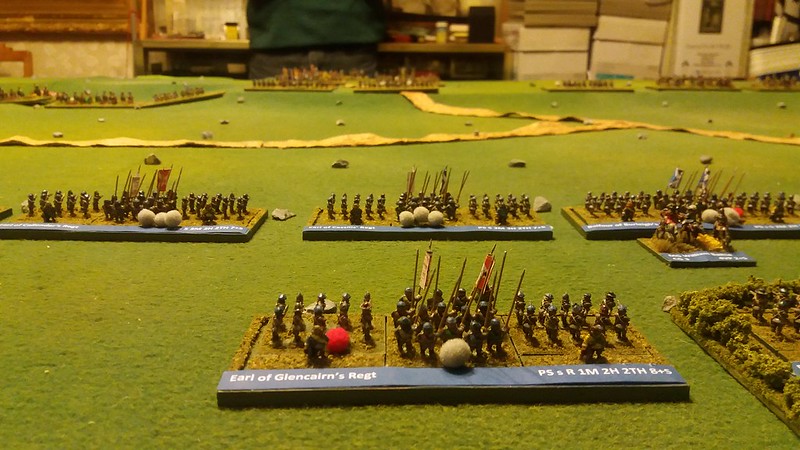 Montrose's force is mainly made up of Gordons from the Marquis of Huntly's estates, plus some highlanders under MacDonnell of Glengarry and the veteran Irish Brigade. The small reserve consists of a small body of "turncoat" highlanders under Forbes of Skellater and two units of rabble (camp followers/baggage guards). I was going to put down some small fields to break up the battlefield visually but someone put them back in the terrain box so they never made it onto the table: 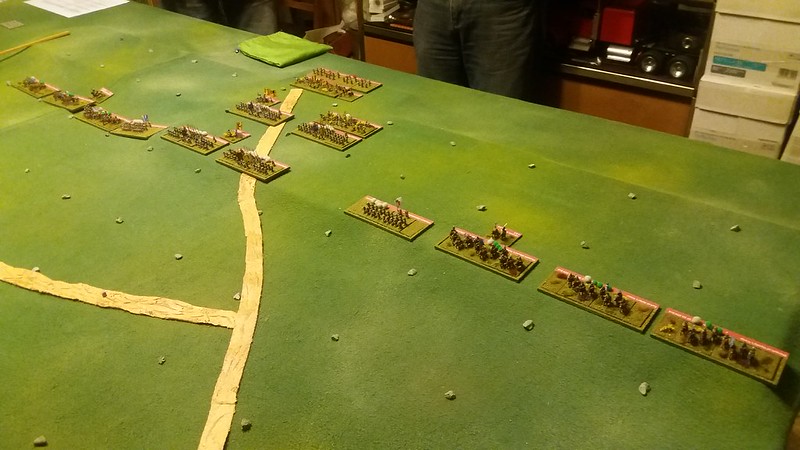 Baillie's army is by comparison a mass of hodden grey - seven regiments of mainly inexperienced pike and musket armed lowland levies and five troops of pistol armed cavalry....Baillie is reluctant to engage Montrose but is forced into action by the representatives of the Committee of the Estates. He deploys near the banks of the Don (Just off the table behind the marshy areas in the foreground): 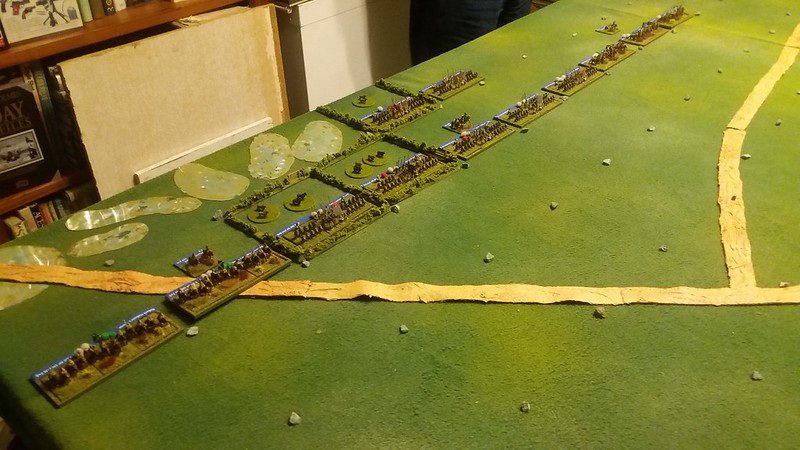 As the attackers the Royalists move first so the Gordon Horse and supporting Irish commanded shot, led by Lord George Gordon on the right and Viscount Aboyne on the left, thunder down the hill and crash into the opposing Covenanter troops of horse, confident of victory as each troop is counted as a small veteran Swedish horse unit: 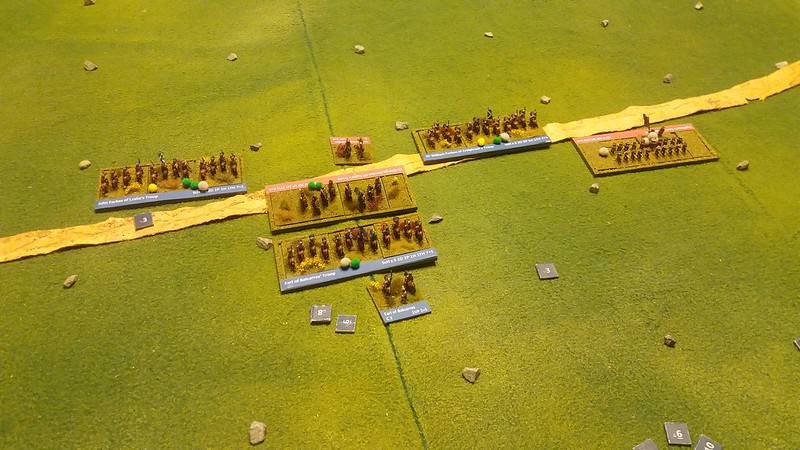 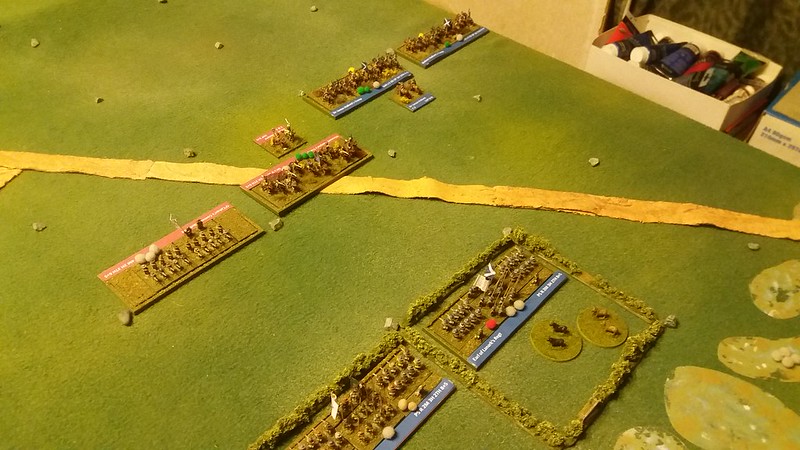 But the Royalist's plan goes up in smoke as Balcarre's and Halkett's troopers destroy four of the six Gordon horse troops in quick succession...Lord George Gordon is wounded and rides from the field......while Aboyne and his remaining troop eventually pursue one of Halkett's off the table all the way to the Boats of Forbes....opps!?!

On the hill Montrose has some difficulty motivating the infantry to begin with, but eventually the Gordon infantry move forward, while the Covenant line remains on the defensive amongst the enclosures near the river Don.  On the flanks the surviving Covenant cavalry try to attack the flanks of the advancing infantry after dealing with the remaining troops of Gordon Horse, but they can't inflict enough damage to destroy the infantry: 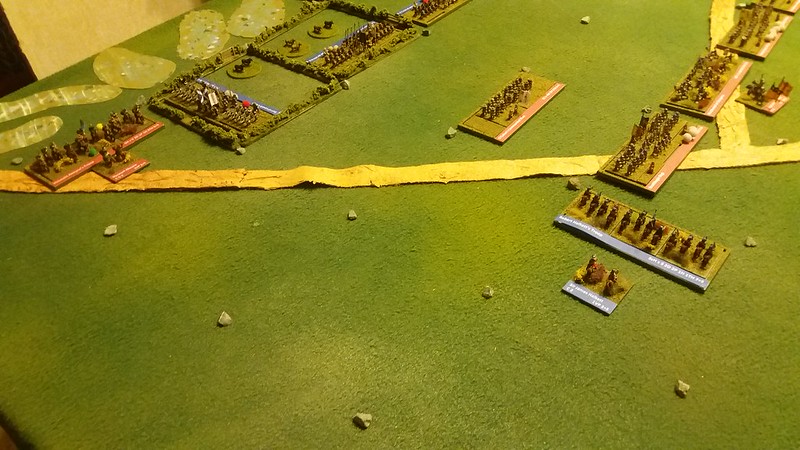 On the other flank Montrose's young nephew, The Master of Napier, commanding the reserve, was very keen to join battle and advanced intrepidly across the table. His progress was eagerly noted by Balcarre's troopers, who decided to charge into the flank of the rabble rather than face the more daunting prospect of facing William Gordon of Minimore's Regt. While they managed to inflict one hit on the camp followers the other was saved, allowing the rabble to turn and face the cavalry the next turn.... 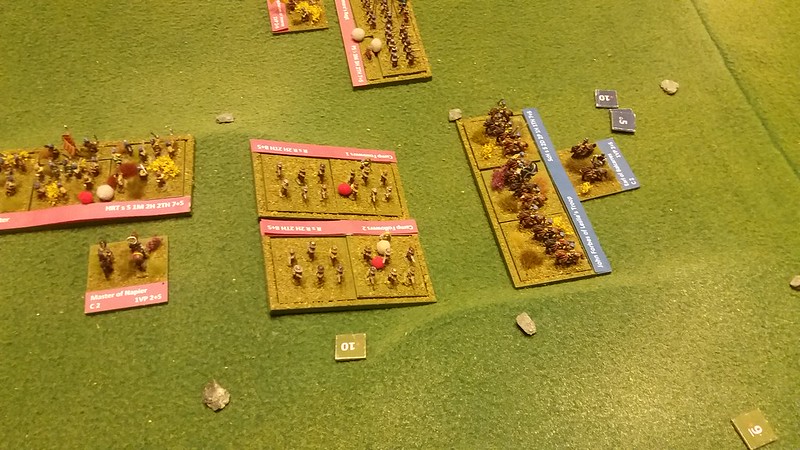 Which they did manage to do, killing the cavalry unit and taking Balcarre's prisoner.

On the other flank Montrose personally led the Strathbogie Regt against the last Covenant cavalry unit, destroying it with shooting and capturing Sir James Halkett alive: 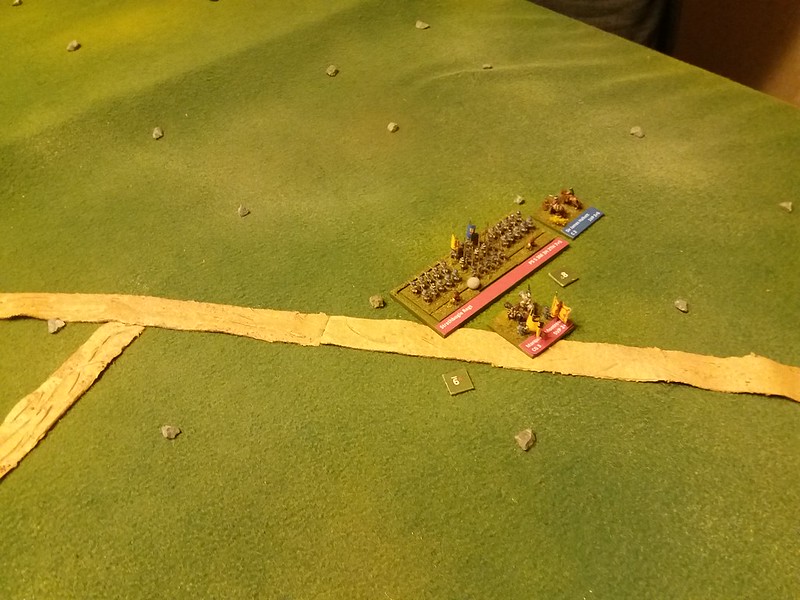 So, as in the actual battle, Baillie's infantry were left to face the bulk of Montrose's remaining forces....Clan MacDonnell swept away Balfour of Burleigh's raw recruits ..... 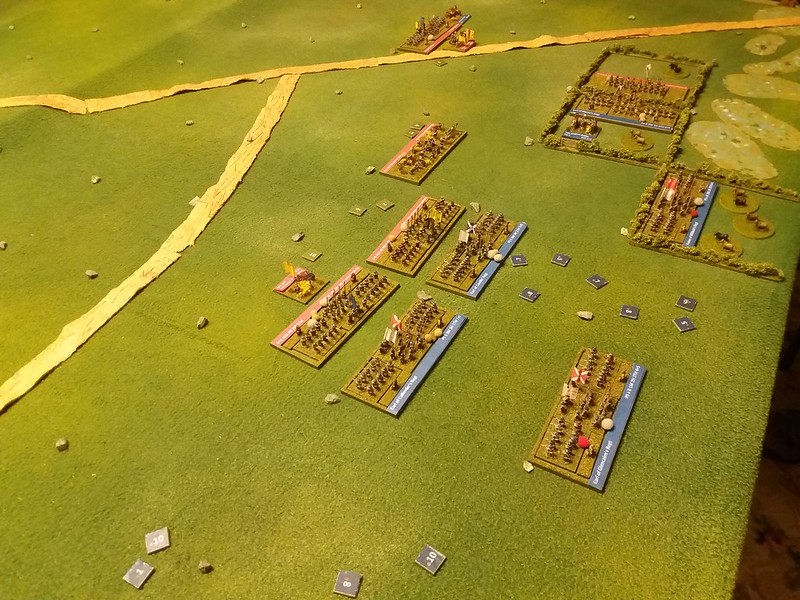 Which was enough to make the Covenant hand over their last two victory medals to give Montrose a very close run victory.

As all four of us playing had at least some Scots connections the game was played in a very jovial atmosphere (Roy does a very good imitation of a Scots camp follower brandishing her griddle pan).

For me it was very good to finally be able to refight one of Montrose's 1644/5 battles using completed armies.....plenty more refights left to do though!
Posted by PP at 01:16