This a a brief write-up of a small action I recently played myself to try out a few ideas using our Celtic Fringe house rules for the "For King and Parliament" ruleset.

After his victory at Auldearn in May 1645 Montrose continued to operate in North East Scotland, being careful to protect the lands of the Gordon clan, one of his two main sources of troops. Against him the Covenanters reacted to Hurry’s defeat by deploying two further forces in the field to protect the Scottish Lowlands. The main force under the reluctant command of Baillie led Montrose on a merry chase round Strathbogie and Aberdeenshire for two months before being finally bought to battle at Alford on the 2 July 1645. Meanwhile, the smaller Covenanter force, commanded by the Earl of Crawford-Lindsay, was based in the Mains of Angus to cover Dundee and Fifeshire against any Royalist threats.

In mid-June 1645 Montrose received word that Crawford-Lindsay (an old school friend of Montrose’s but an ardent Covenanter) was camped at Newtyle in Northern Angus. He saw an opportunity for a quick victory over this smaller force and moved to engage him accordingly. This would take the Royalist force much further South than it had previously operated, and potentially leave the Gordon lands open to attack by Baillie’s now unopposed force. As Montrose’s force travelled down the Braes of Mar and into Glen Clova, to enter Angus the entire Gordon contingent (save Nathaniel Gordon’s troop of horse) peeled off and returned Northwards. Exactly why is unknown but it is speculated that they were ordered to return home by the Earl of Huntly, the senior Gordon leader.

Weighing his options Montrose decided that the attack on Crawford-Lindsay with his remaining forces was not worth the risk and so withdrew with the Gordons. At the time Montrose was only some 7 miles from the Covenanter force. This small battle looks at what might have been if Montrose had decided to continue his plan to confront Crawford-Lindsay’s troops with his remaining force, mainly made up of the Irish Brigade.

Looking at the area round Newtyle as depicted by the mid C18 Roy military map Montrose would logically have advanced down the Glamis road to approach Newtyle from the East, avoiding the boggy ground to the North. Crawford-Lindsay’s force was evidently based at Hatton Castle (depicted as the Old House of Newtyle on the map) adjacent to the Newtyle Burn and at the time surrounded by walled fields and enclosures. The castle itself is situated on gently rising ground, with steeper hills behind it (but off the map).

Montrose's Force which he will use to attack the Covenanters is quite small, with only five units in total:

Crawford-Lindsay's small force consists of only three pike and shot battalia (I have deliiberately called this fight a skirmish), but his encampment around Hatton castle is protected by walls and enclosures which can be easily defended. 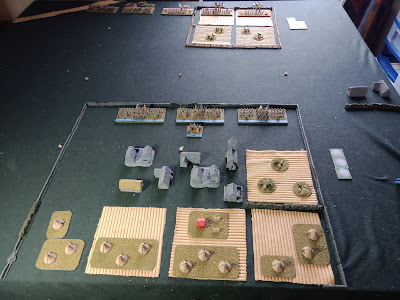 Montrose deployed the Irish Brigade on the left, under his personal command, with MacColla's smaller brigade of MacDonnell Highlanders and cavalry to their right: Montrose's wing units were able to advance steadily, but the Irish centre seemed a bit more reticent to close with the enemy,  On the left Laghtnan’s Commanded Shot exchanged fire with Earl of Lauderdale's Regiment, but took a hit. Rather than become disordered for the upcoming melee they choose to loose their AKS marker to absorb the disorder. Over on the right the MacDonnell's conserved their limited fire for the melee: Montrose urged the centre to advance once again and with some vigour leads the Irish veterans in a series of salvee charges along the Covenanter line. Crawford-Lindsay galloped over to lead his own regiment on the left against the outflanking MacDonnells. With the defensive advantange of the wall aiding their opponents the Royalists only manage to disorder Crawford-Lindsay's regiment with a single hit (red dot at the top) in thier first charge: Next turn Montrose attempts to salvee charge with the Irish again, while MacColla leads the MacDonnells in a highland charge onto the open flank of Crawford-Lindsay's regiment. With the situation seemingly well in hand the Royalist cavalry advances to encircle the Covenant force and capture their camp, earning a 1VP chit for doing so under the scenario conditions. After the smoke of numerous volleys has cleared somewhat Montrose observes that this time his tactics have been more sucessful, with both his opponents own and Casiliss's regiments in serious disarray (two red dots each), though on the Royalist left Laghtnan’s Commanded Shot was unable to advance against the enemy (I pulled a 1 chit, ending the brigade's turn): 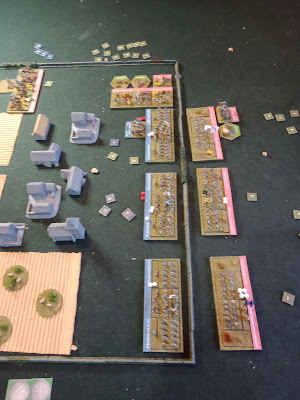 With his force near breaking point Crawford Lindsay successfully attempts to withdraw his line from the now percarious position behind the walls to the castle and surrounding buildings: However Montrose presses the attack and after a hard fight with OCahan’s Commanded Shot Crawford-Lindsay's regiment is routed and the Covenanter force hands 3 more VP to Montrose, ending the encounter in the Royalist's favour: 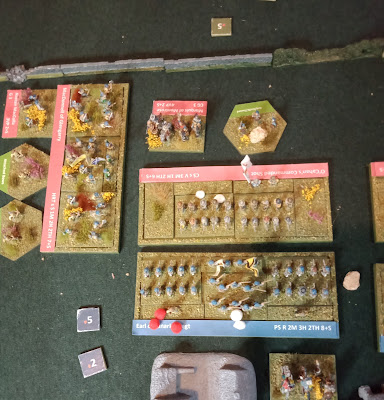